At least as relevant is the new concept of SmartIDs, which are an alternative way of addressing components. SmartIDs encapsulate relevant information directly in the component ID so that component nodes become optional. The idea is to keep simple things simple and use the full range of information in component nodes only for the tricky cases. This paradigm shift is still under development and deserves its own major release, but in response to the enthusiastic customer feedback on the existing functionality and stability we are making it available now in the form of a - fully supported - preview feature.

The SmartID concept has also paved the way for integration of QF-Test with Robot Framework, letting fans of Robot Framework implement their keywords via QF-Test procedures. The tool integration carried out with a pilot customer will be presented at the RoboCon conference (May 19-20, 2022).

Among the many other improvements, the following stand out: You can now run QF-Test itself with Java 17 for vastly improved display on scaled monitors, QF-Test reports have been revised with a more modern look, screenshots for the run-log are taken of relevant screens only and duration indicators assist in analyzing the time spent during tests. Major version updates like the switch to Groovy 4 or support for testing Java 19 become mere side-notes in the detailed release notes.

2022-07-20
Besides the usual bug fixes, this update improves clean shutdown of running batch tests and adds the ability to clear global variables in calldaemon mode.

2022-11-29
This maintenance release comes with many version updates, among them JRE version 8_352, Eclipse / SWT 4.26 alias "2022-12" as well as JxBrowser 7.28. Besides a few bug fixes it also introduces some smaller new features, including an option for prefixing classes when recording SmartIDs or the new rc methods pushOption and popOption.

Electron applications can now be addressed via the far superior CDP-Driver connection mode, the options dialog has a search functionality and copy/paste of images is now possible for image check nodes and screenshot logs.

Several more new features and version updates are complemented by various bug fixes, some of which have a slight impact on backwards compatibility

2022-01-20
This maintenance release includes a few minor version updates and fixes a handful of bugs.

By talking directly to the browser it supports Google Chrome, Microsoft Edge and Opera on Windows, Linux and macOS with a performance, stability and feature set formerly only available with QF-Driver for Chrome on Windows. And that's on top of a massive performance boost of QF-Driver for Chrome with observed speed-up ranging from 10% to over 500%.

The user interface of QF-Test has been cleaned up and streamlined, using a uniform flat look with fewer lines and beautiful new icons that still maintain the existing image language and are immediately recognizable. The HTML manual and tutorial as well as report and test documentation have also received a face-lift.

The update of the Jython integration to fully support international characters is complemented by several more new features and a handful of bug fixes.

2021-07-21
This maintenance update works around a limitation of CDP regarding text retrieval and fixes a number of smaller bugs.

2020-11-10
The medium upgrade QF-Test 5.2 focuses on integrated testing of Java desktop applications that are displayed in a browser using the technologies Webswing or JPro...

Most notable among many version updates are updated support for Chrome 85 in QF-Driver mode on Windows as well as Groovy (3.0.6) and Jython (2.7.2) updates. The life of Mac users is made easier by the Apple notarization of QF-Test for macOS.

This maintenance update adds support for Eclipse / SWT 4.18 alias "2020-12" and for JxBrowser 7.12. It further rounds off Webswing support and fixes a number of bugs, including an issue with Jython on Linux.

This maintenance update adds support for testing applications based on Java 16 and fixes a handful of bugs.

This maintenance update adds support for Eclipse / SWT 4.19 alias "2021-03" and fixes a number of smaller bugs.

2020-07-08
The medium upgrade QF-Test 5.1 focuses on bringing support for embedded browsers - JxBrowser (including version 7), SWT Browser and JavaFX WebView, up to par with that for "normal" browsers...

It also comes with support for Java 15, native Electron dialogs and customizable HTML reports. The internal JRE provided with QF-Test has been updated to Zulu OpenJDK 8_252.

The maintenance upgrade QF-Test 5.1.1 adds support for Opera 70 and JxBrowser 7.10 and fixes a number of bugs.

2020-02-24
It's time to move on: QF-Test 5.0 is a major step forward - not just with its new look and support for native Windows applications, but also with other enhancements that make automated testing more convenient and reliable...

This maintenance release includes support for Eclipse/SWT 4.15 alias 2020-03 and fixes a few minor bugs, in particular for the new Windows engine.

QF-Test 5.0.2 is a maintenance release with a few minor version updates and a handful of bug fixes.

Starting with version 6.0, preview features will be included in the releases. These are features that are already very advanced in development, but are not yet available in the final QF-Test quality and that you may try.

We are perpetually developing 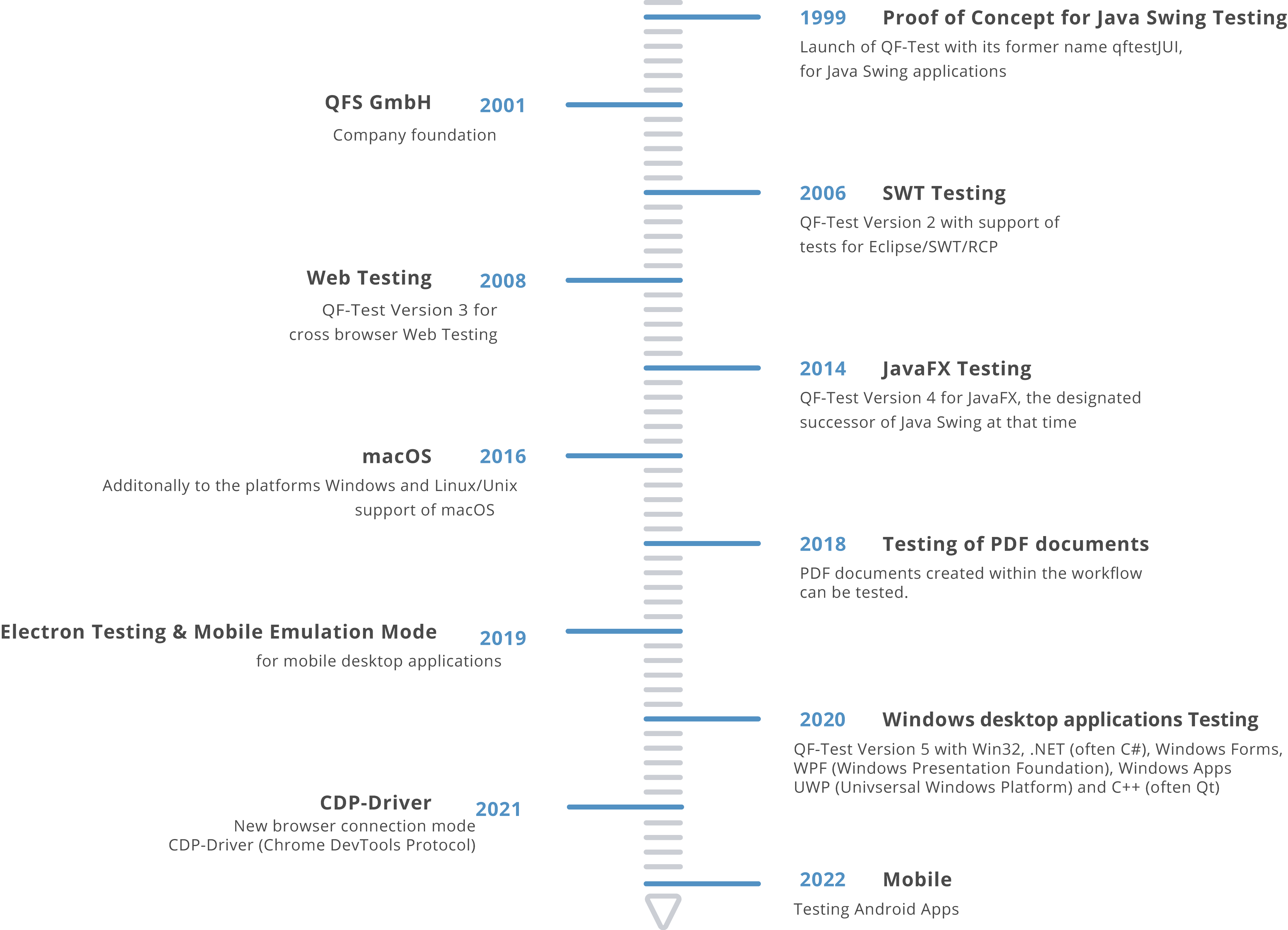 Stay up to date

We use "Matomo" cookies to anonymously evaluate your visit to our website. For this we need your consent, which is valid for twelve months. A revocation, so-called opt-out, is possible at any time on our privacy page.

We use Matomo for analyzing and optimizing our website. Cookies permit an anonymous collection of information that help us offering you a clear and user-friendly visit of our web pages.

The Matomo session cookie is used to track the visitor's page requests during the session.